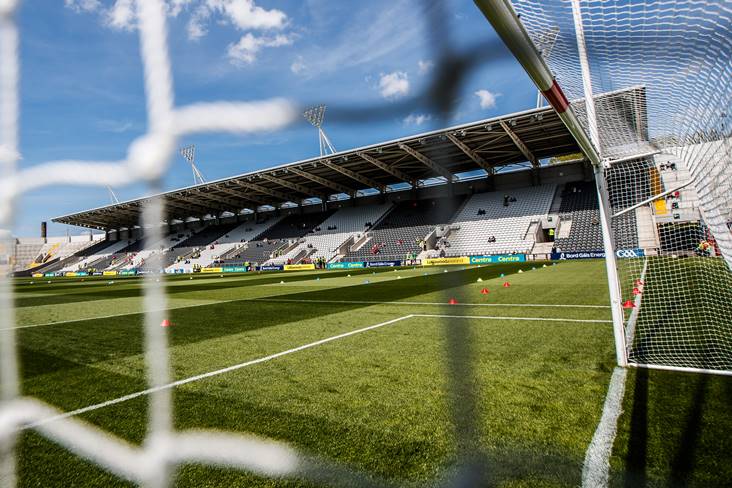 THERE’S history in the making this weekend as the 2020 Lidl Ladies National Football League gets underway – with Cork preparing to host Westmeath at Páirc Uí Chaoimh.

For the very first time, the Cork senior ladies will get the chance to play at the fabled venue, when they begin the defence of their League title against visitors Westmeath on Saturday (4.0).

On Sunday, the ‘Battle of the Champions’ will get the Facebook Live treatment on the LGFA Page http://bit.ly/2OvUJ2D, as 2019 TG4 All-Ireland Senior Champions Dublin welcome Intermediate winners Tipperary to Ballyboden St Endas (2.0).

There is a full list of fixtures across the four divisions on the opening weekend, as Monaghan begin their quest to regain top-flight status with a trip to Wexford in Division 2.

FOR the very first time, the Cork Senior Ladies Football team will have the chance to play at Páirc Uí Chaoimh.

The LGFA is sending a camera to the famous Leeside venue to capture history, as Ephie Fitzgerald’s charges begin the defence of their Lidl NFL Division 1 crown against visitors Westmeath.

The Lake County avoided relegation from the top Division last year and have their work cut out again in a highly-competitive pool.

Cork have eight survivors from last year’s NFL Division 1 Final victory over Galway in their starting line-up, with TG4 All Star Orla Finn named at top of the left.

Cork are targeting a 13th Division 1 crown this season and Westmeath couldn’t ask for much tougher opposition as the new campaign gets underway.

Roisin Phelan’s return after missing the 2019 season due to work commitments is another massive boost for the Rebelettes.

The ‘Battle of the Champions’ will kick-start the LGFA’s Facebook Live coverage of the 2020 Lidl National League campaign: http://bit.ly/2OvUJ2D

Visitors Tipperary have ten of the team that started the Intermediate decider against Meath in their starting line-up, as they aim to preserve top-flight status once again.

Tipp acquitted themselves well in Division 1 last season, claiming a famous victory over Cork at Páirc Uí Rinn along the way.

They’re without Aisling McCarthy and the injured Anna Rose Kennedy for the trip to the capital, but there’s still enough quality in the team to give Dublin a real test.

Galway claimed the 2019 TG4 Connacht title again but they came up short in the Lidl NFL Division 1 and TG4 All-Ireland Senior Finals.

The Westerners will aim to go one better in the national competitions this year, and they’ve named a strong team for the visit of newly-promoted Waterford.

Last year’s captain Tracey Leonard will play alongside cousin Roisin in the full-forward line, as Galway aim for a winning start.

The Leonards are two of six survivors from the 2019 All-Ireland Final team, while life without recently-retired Michelle Ryan begins for Waterford with a trip to Corofin.

Waterford gained promotion by seeing off Kerry in the 2019 Lidl NFL Division 2 Final – and staying in Division 1 this year would be a notable achievement.

Mayo reached the All-Ireland semi-finals last year and were unlucky to lose out to Galway by just a single point.

The new season begins with the visit of Donegal to Swinford Amenity Park, and this should be an intriguing fixture.

Both teams are down key names for various reasons, with Mayo’s Kelly sisters Niamh and Grace, and Sarah Rowe, in Australia.

Donegal do have ace forward Geraldine McLaughlin in their starting team, however, and she can wreak havoc on an opposition defence on any given day.

Both teams will feel confident that they have enough to survive in Division 1 this year and reaching the Final would be a huge bonus.

In the revamped National League, just the top two in each division will qualify for each of the four Divisional Finals, with no semi-finals this year.

In a competitive Division 2, reaching the Final this time would be a huge achievement for the Breffni girls, who have a tough start at home to Kerry.

The Kingdom will be aiming to bounce back to the top flight at the second attempt, having lost out to Waterford in last year’s Division 2 Final.

Armagh were semi-finalists last year, but lost out to Kerry.

The Orchard County will hope for another strong campaign but they face a tricky start away to Clare.

Clare lost out by just four points away to Armagh last year, and they’ll look to make home advantage count this time.

The next aim for the Red Hand County is to get up to Division 1, but they have a big assignment on their hands away to newly-promoted Meath.

Monaghan’s long run in the top flight came to an end last year when they suffered relegation.

But hopes are high that the county can bounce back, and reaching an All-Ireland Minor A Final last year suggest that there is emerging talent to harness.

Wexford did more than enough to stay up last year, and they’ll aim to consolidate again.

Fermanagh landed the Division 4 title last year and will operate in the third tier this time.

The absence of 2019 captain Joanne Doonan, who’s in Australia, is a blow but Fermanagh will look to hold their own in Division 3.

Kildare finished just outside the semi-final placings last year and will aim for another competitive season.

Relegation to Division 3 was a blow to Laois last year – but they have home advantage to begin with as they aim for promotion.

Every game counts as just the top two finishers will compete in the four divisional finals, and Wicklow will provide stiff opposition.

Wicklow were just outside the semi-final places last year and this Leinster derby should prove hugely competitive.

Longford did well to reach the Division 3 semi-finals last year and they’ll hope for another big season.

Claiming All-Ireland U16 and Minor titles last year was a huge boost for Longford and they’ll now look to work emerging young talent into their elite ranks.

Down finished second from bottom last year, as Offaly dropped into Division 4, and the Mourne County will hope for a stronger League season.

These are two counties that know plenty about each other.

They met last year in the Division 3 semi-final, with Sligo coming out on top by three points.

Both counties will hope to make a big push for Final placings, and this is a key fixture to get things underway.

Antrim won the TG4 Ulster title last year but came up short in the hunt for national honours.

They were beaten by Fermanagh in the Lidl NFL Division 4 Final, before losing out to Louth in the All-Ireland Junior semi-final.

But the Saffrons are a team to watch this year, and Offaly have a tough task on their hands, after suffering relegation from Division 3 last year.

Carlow began their 2019 campaign like a train but that momentum didn’t continue and they missed out on a semi-final place.

Visitors Limerick contested the Division 4 semi-final last season, but the Shannonsiders suffered relegation back to the Junior Championship ranks.

These two teams will be quietly confident, however, of making a big impact in Division 4 this season.

Derry finished second from bottom of the Division 4 standings in 2019, and they’ll hope for an upturn in fortunes this time.

Their opponents are Leitrim, who struggled themselves last year, finishing just two points ahead of Sunday’s opponents.

There is no threat of relegation in Division 4 but both counties will aim to be competitive in this pool nonetheless.