'I thought the days of winning awards were gone' 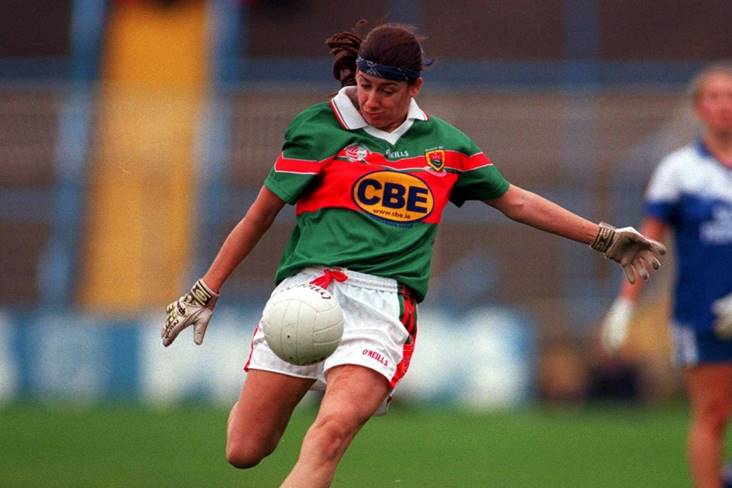 LOOKING back on a glory-laden career, Christina Heffernan pinpoints a couple of key memories that stand out.

Tomorrow evening (SAT), Mayo legend Christina will be officially inducted Ladies Gaelic Football Association’s Hall of Fame at the TG4 All Star banquet, in association with Lidl, and her storied roll of honour makes her a worthy recipient of this prestigious award.

Having lost a series of All-Ireland Senior Championship semi-finals in heart-breaking fashion, Mayo finally got over the line in 1999 to contest their very first Senior decider.

Mayo had won an All-Ireland B title in 1993, when Christina’s inter-county career was in its infancy, but this was the big one.

Christina, a seven-time All Star recipient, recalls: “We lost seven All-Ireland semi-finals in a row and then, just to get over the line…We knew were up against Waterford (in 1999), they were the team of the 1990s to beat. Just to win the first one…it was unbelievable. When we won it, the support from the county that came out to meet us, you couldn’t possibly forget.”

Christina realised that she was fortunate, as so many brilliant Mayo players had gone before but unfortunately never got to sample that winning feeling on All-Ireland Final day.

It would happen for Christina and Mayo three more times, and she was captain in 2002, another “very special occasion.”

Christina, a majestic midfield player in her pomp, recalls: “We were playing Monaghan and I was up against one of my best friends.”

Christina, who was named on the TG4 Team of the Decade in 2010, had attended college in IT Sligo with Monaghan star Jenny Greenan, and the pair lived together.

While Christina was naturally thrilled to captain Mayo to another All-Ireland title, her heart went out to Jenny.

And that’s what’s special about Christina Heffernan. She cares deeply about those closest to her.

She cites the constant support of family as a big part of her ability to forge a successful career as a Ladies Gaelic Footballer. Married to Raymond Connelly, himself a former Mayo player, the couple have three children; Ava (8), Leah (6) and Seán (3).

Famously, Christina played alongside her sister, Marcella, two years her junior, during so many of Mayo’s great days. Mum Anne is still alive and well but, sadly, Dad Christy passed away in 2018.

Christina’s parents were positive formative influences on her career, while she also pays tribute to club manager Paddy Sheridan with Hollymount, who she played under for a long time.

With Ballinrobe Community School, Christina won five All-Ireland Medals, and she was also a Lynch Cup winner during her time with IT Sligo.

At club level, Hollymount were successful on multiple occasions at local and provincial level, but they lost out to Shelmalier in the 1999 All-Ireland Senior Club Final.

Instead, it was in the colours of Mayo that Christina won national silverware.

As well as those four coveted All-Ireland senior medals, Christina landed three National League Division 1 crowns, in 2000, 2004 and 2007, the year she pulled the curtain down on her glorious time in the green and red.

Off the field of play, and after graduating from college, Christina gained a job with the HSE in Sligo in 1998. She got married to Raymond in 2008 and in that same year, a transfer to the HSE in Castlebar was rubberstamped. Working in registration, Christina has been there ever since.

Christina also coached the Mayo U16 team for a spell, and was involved when they won the All-Ireland B title in 2010.

Coaching had to take a back seat for some years after that, as Christina and Raymond built a family, but she’s now back involved with Roundfort National School, where her children are educated, as well as the underage section at Hollymount.

Football also helped Christina see the world during her playing days, with All Star trips to Singapore and New York recalled fondly.

She thanks Ita Hannon, the current Connacht LGFA administrator, for first calling her onto the Mayo senior panel, before crediting John Mullin, his son, Jonathan, and Finbar Egan with overseeing an unprecedented period of success for the county in later years.

She also recalls Keith Barr being involved with Mayo, before the All-Ireland titles followed.

“It was great, he was such an icon in Dublin,” Christina recalls. “To have someone like that with us…he changed things up differently.”

And now, long after Christina thought that her award-winning days were over, she returns to the podium.

When asked how she reacted to hearing the news that she was being inducted into the LGFA Hall of Fame, Christina smiles: “I was shocked, it never entered my head. I thought the days of winning awards were gone. It’s a great honour. I have to thank Ita for bringing me onto the scene. I remember her calling to the house, and she promised Mam and Dad that she would look after me.”

It was the start of a career that would see Christina Heffernan climb to the highest heights of Ladies Football. And tomorrow, she’s deservedly back in the limelight.