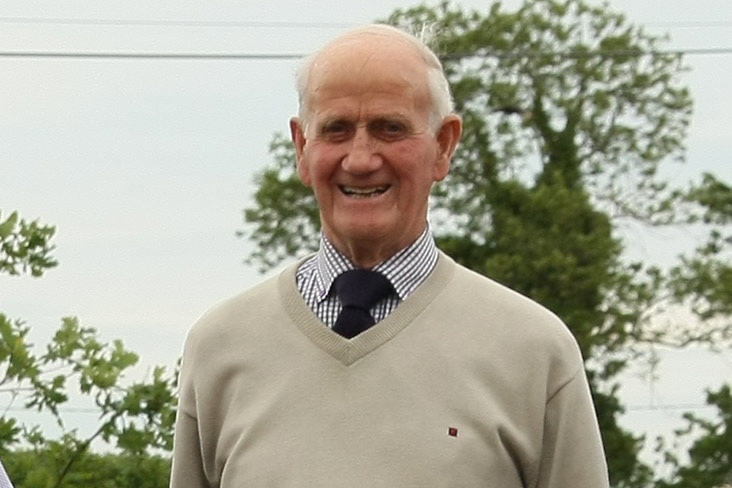 Tom Keogh a lifelong Curraha GAA stalwart as a player, selector, treasured supporter and benefactor has died, having celebrated his 90th Birthday recently.

Tom was one of a family of eight  and is survived by sisters May, Rita, Anna and Violet and by brothers Charlie and John. He was predeceased by his son Fergal and by  brother Aidan.

In the 1950s and 60s Tom was an outstanding member of  several Curraha teams. He was a fearless full back, usually accompanied at corner back by his brother Aidan  and they were a very formidable duo who defended stoutly and kept many a roving full forward line in their place.  Tom played for Curraha in the 1955 Meath Junior Final with Aidan, only to be beaten narrowly by Carnaross.

He also lined out on Curraha teams in the Intermediate championship of 1956, the Junior Championship in 1957 and 1958. But that 1958 Final will long be remembered as the one that got away, having beaten Clonard on a scoreline of 3- 5 to Clonards 2-7.

Tom also played starring roles on Curraha teams in 1960 and on the Junior B team in 1961 when members of earlier teams had retired or emigrated.  Right into the 60s and 70s, Tom was an ever present, involved either as a selector or in various coaching roles with Curraha and was a selector on that famous  fifteen that swept all before them in 1976, culminating with a never to be forgotten victory in that years Meath Junior Championship final over Nobber, a team on which Meath hero Gerry McEntee starred

Tom’s sons Tomas and Cormac, several of his nephews, and his grandson Sean  who was a panellist on the victorious Curraha team which reached the All Ireland Junior Championship  Semi Final in 2015 , have all maintained the family name in the highest esteem in Curraha GAA circles, ensuring the legacy of Tom and his brothers Charlie and John who all played distinguished roles in the history of Curraha will long be remembered.