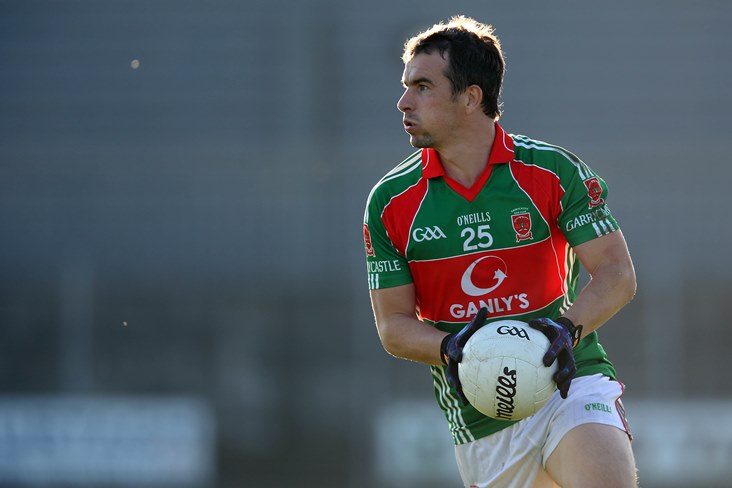 Dessie Dolan in action for Garrycastle

Dessie Dolan rolled back the years as Garrycastle cruised to a Leinster club SFC first round victory over a poor Emmet Óg Killoe outfit at sunny TEG Cusack Park.

Replaced at half-time in the Athlone club's recent dramatic county final win over St Loman's, the 40-year-old former All Star kicked his side's first five points - three of them from frees - as they set up a provincial quarter-final meeting with the Meath champions at the same venue in a fortnight's time. For a team with plenty of experience at this level, Killoe were a huge disappointment and only managed two scores from play from Ronan McGoldrick and young sub Cian Dooner.

Garrycastle led by 0-7 to 0-4 at half-time and the Longford champions had goalkeeper Shane Fitzpatrick to thank for not being further behind after he denied James Dolan and Jason Nugent goals in the first 11 minutes.

Sean McCormack slotted three frees for Killoe who fell further behind after the restart when points from corner back Mark McCallon, Alex Gardiner (free) and Eoin Monaghan doubled Garrycastle's advantage. Mickey Quinn eventually opened Killoe's second account from a '45, but it continued to be one-way traffic as two points each from subs James Sheerin and Conor Cosgrove helped the 2012 All-Ireland runners-up to a suprisingly comfortable victory.