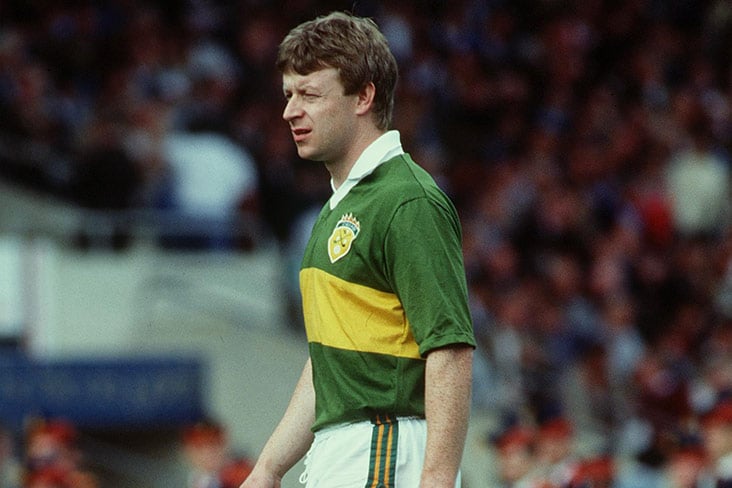 The modern game has, in general and sadly so, seen the demise of the high fielder, the one who soared into the sky to claim possession and much to the approval of the crowd.

We now have a more mobile game, tactics and style of play to win a match.

In fairness the GAA has via the mark etc., tried to bring that high fielding art back into our games.

They are aware of its uniqueness and popularity. A characteristic that makes our games our game.

There a few notable exceptions. Players like Michael Murphy continue to thrill the crowds with fielding that would be at home in any generaation.

Indeed Donegal continue to produce and some will say ironically, some exceptional young fielders.

Howver traditional counties like Meath and Roscommon are reverting more and more to the running game.

Dublin always and that includes the present crop, the greatest team of all time, incorporated this ball close to the ground policy.

Kerry who many maintain invented and mastered  the high ball and who introduced the likes of the aptly named Pat ''Aeroplane'' O Shea to the game threw out any notions of the long ball with the coming of Mick O Dwyer way back in 75.

Over the next couple of days we will take a look at these high flyers and would love to hear your views and suggestions on our various choices through the forum section.

The great Mick O Connell had all the skills, probably the most complete Gaelic footballer ever. He timed his leaps with grace and perfection. But for us Sean Walsh was the finest Kerry jumper, a gene he passed on to his son Tommy.

Hitting the measurement tape at 6' 1', well it was only inches and feet in those days, the Kerins O Rahillys' clubman had the uncanny ability to leap and stay airborne for that extra second or two.

Originally dubbed Supersub for his inablity to stake a place on the starting Kingdom xv, Walsh's second half introduction and spectacular fielding nearly swung events in the 1976 All Ireland decider, a game which the Dubs had well under control. It was enough to convince Micko that here was a certain starter for future affairs. So what if SW did not buzz around like Spillane and co. You needed that blend, the strenght and aerial dominance to allow Jack O Shea have the freedom of the park.

Walsh and O Shea went on to form a legendary midfield partnership. They were at the centre of the Green and Gold charge as All Ireland titles went south west four years running.

And then like many a high fielding midfielder and with mother time interfering Sean Walsh was called back to man the edge of the Kerry square for the early to mid eighties. Another three Celtic Crosses were heading to Tralee as again Walsh was the man to ''Fit the Bill''.

A Real Kerry Great and that takes some doing in the Kingdom.