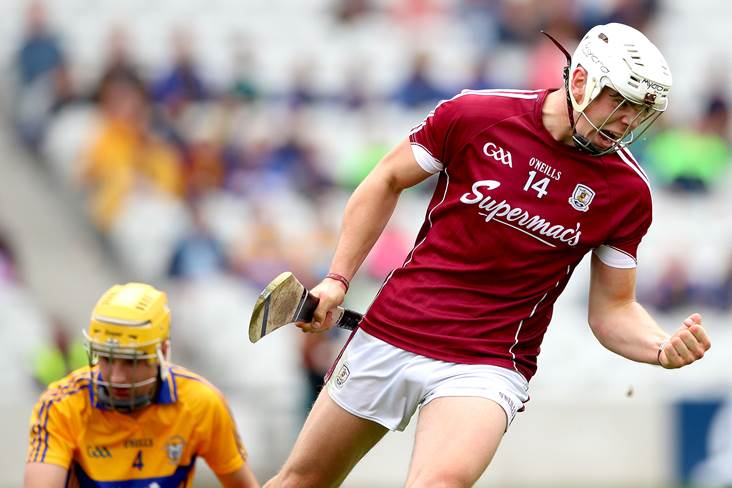 Galway's Jack Canning celebrates after a scoring a goal against Clare.
©INPHO/James Crombie.

Joe Canning’s nephew has been drafted into the Galway hurling squad for 2021 with manager Shane O’Neill making seven changes as they get ready for the new season.

Jack Canning scored 2-2 and was man of the match when Galway defeated Cork in the 2017 All-Ireland minor final on a day when his uncle Joe finally won a senior medal.

Jack Canning played with the Galway U-21s in 2018 but then moved to Australia to pursue a rugby career with Northern Suburbs Rugby Club in Sydney, having previously helped Cistercian College, Roscrea, reach the Leinster schools senior cup final.

Canning returned home from Australia last year and featured for Portumna in the Galway senior hurling championship and has been drafted into the county senior squad where he will link up with 33-year old uncle Joe.

Another member of that victorious minor team in 2017, Daniel Loftus from Turloughmore, will join his brother Sean in the squad.

Castlegar’s Sean Neary, who captained Galway to the 2018 All-Ireland minor title at centre-back , has also been drafted along with Liam Mellows defender Stephen Barrett and forward Jack Hastings.

Former Galway U-21 corner-back Declan Cronin has been rewarded for some excellent performances for Cappataggle in the county championship with a call-up, while Athenry forward Cian Burke has also been brought in as O’Neill and his management team prepare for their second year in charge.

Goalkeeper James Skehill has retired while others to depart include Eanna Burke, younger brother of 2017 All-Ireland winning captain David who has committed for another season, Paul Killeen, Jack Grealish, Tadhg Haran, Kevin Hussey and Ronan Burke, brother of full-back Daithi.

Cork fundraiser brings in over €1m profit for clubs