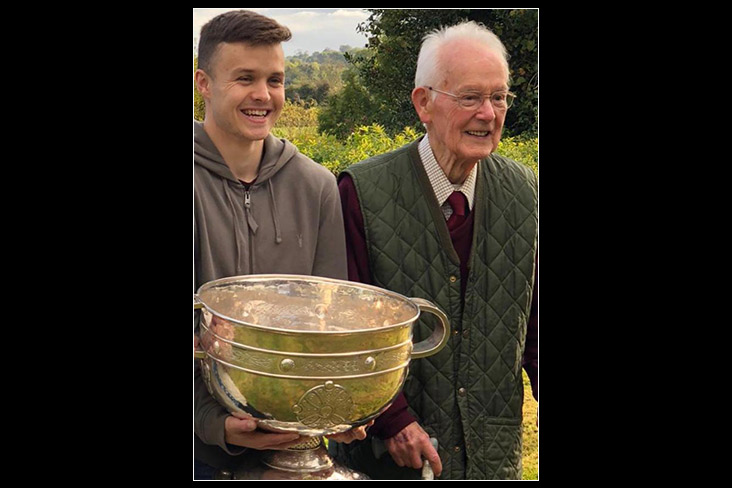 There was widespread sadness in the Moynalty community with the sad passing of Paddy Murchan of Shancarnan, Moynalty, an Honorary President of Moynalty GFC.

Paddy was heavily involved in the Juvenile section of the club having taken over the reins from the late Fr Tully in the 1970s. Many a day the white Renault car was filled with young Moynalty players on the way to juvenile matches across the county. Paddy also served the club on various committees down through the years.

As an educationalist, Paddy instilled a great appreciation for Gaelic games in the generations of pupils he taught as Principal of Scoil Mhuire NS, Moynalty.  Paddy spent many a school day coaching and teaching the young children of Moynalty in the skills of Gaelic football. During his time as a teacher, Paddy also taught at Maio, Carlanstown, and Kentstown.

Paddy Murchan was a founding member of Moynalty Community Council Muintir na Tire. However, it wasn't just the Community Council that benefitted from Paddy's talents and involvement.  From the Steam Threshing, Moynalty Credit Union, Moynalty Tidy Towns, Moynalty Active Retirement, and many more, he left his indelible mark on these community organisations. Paddy was a willful and dynamic man. He had the vision and ability to make things happen for the benefit of the community he loved so much.

From the early days of the Moynalty Steam Threshing, Paddy Murchan joined forces with his good friend, the late Gerry Farrell in video recording and documenting all the activities and personalities of the Steam Threshing Day. This now serves as an invaluable and historic record for generations to come.

Paddy was involved in all aspects of the community in Moynalty, and received great satisfaction from that involvement.

He was always a fantastic source of good advice and counsel to legions of young people in Moynalty. Paddy often prepped his former students for job interviews who would return to him to seek advice and guidance and also assisted many local university students in their courses.

Paddy was very proud of his five sons, who in turn also gave great service to Moynalty GFC, on and off the field. Another great source of pride for Paddy over recent years were the exploits of his grandson Eoin Murchan, the holder of four All Ireland Medals. Paddy was never more happy when young Eoin scored the all important goal in the 2019 All Ireland Final for Dublin against Kerry.

Paddy Murchan will be greatly missed by the entire community of Moynalty and indeed beyond, however he will be especially missed by his loving wife of over 60 years, Maureen.

Moynalty GFC sends its sincere and heartfelt condolences, to Maureen, Michael, John, Peter, Damien and Louis and his extended family and wide circle of friends.

Paddy’s funeral mass took place on Monday 25th January 2021 in the Church of the Assumption, Moynalty with internment in the local cemetery.