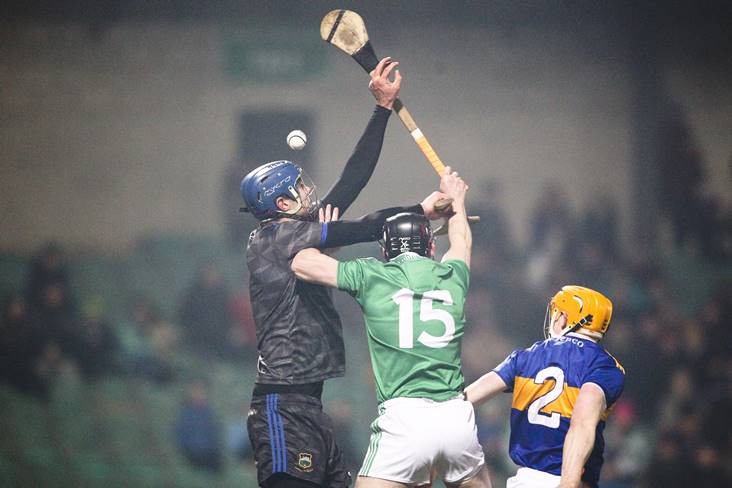 Munster giants Tipperary and Limerick will meet in the opening round of the 2020 Allianz Hurling League. ©INPHO/Ken Sutton.

Tipperary and Limerick get the 2020 Allianz Hurling League underway tomorrow evening when they cross swords at Semple Stadium. Here are our previews for opening round weekend:

HL Division 1 Group A round 1

These heavyweights collide in the big hurling showdown on Saturday and its John Kiely’s Limerick side that are the 8/11 favourites travelling to Thurles.

The holders were impressive in their 1-32 to 0-20 hammering of Cork in the Munster SHL final two weeks ago and will be keen to continue their winning ways when they visit their neighbours.

Tipp embark on their first piece of ‘competitive’ duty since downing Kilkenny and lifting the Liam MacCarthy Cup back in August.

When these two met in this competition last year it was the Shannonsiders that scored a comfortable 1-21 to 1-14 win on home turf, but they’ll be facing a vastly improved Premier outfit this time round.

HL Division 1 Group B round 1

Wexford earned a bit of early silverware for 2020 by finishing with a flourish against Kilkenny in last Saturday’s Walsh Cup final.

The Slaneysiders return to Portlaoise this weekend for a league opener with Eddie Brennan’s Laois side and manager Davy Fitzgerald has said they must “be ready for a battle” against the O’Moore men.

Understandably, the hosts are 11/2 outsiders for this one and will be keen to try and upset those odds as they target survival in the top tier.

The Leinster champions, however, look a safe bet to book two early points.

HL Division 2A round 1

Kerry missed out on promotion to Division 1 last March after losing to Westmeath by two points in their league final.

They travel to Castlebar to take on a Mayo side that edged a relegation playoff against London on the very same day and should pick up two early points when all’s said and done.

HL Division 2B round 1

Warwickshire just about survived relegation last year and begin their new season by travelling to ‘the Hyde’ in a bid for two early points against the Rossies.

HL Division 3B round 1

HL Division 1 Group A round 1

The early throw-in is in Salthill on Sunday as Galway and Westmeath square off in Round 1 of Group A in Division 1.

The Tribesmen have entered 2020 under a new regime in manager Shane O’Neill and the Limerick native will be eager to hit the ground running in this competition when the Lake men come to visit.

Westmeath are Division 2A champions but that doesn’t seem to count for much here as they head west as massive 11/1 underdogs.

Joe Canning struck 0-57 in six outings for Galway in last year’s competition and dons the maroon and white for the first time in 2020 after missing last weekend’s Walsh Cup final defeat to Wexford.

This Munster derby hits Walsh Park on Sunday as Waterford and Cork each look to take early points in Division 1.

The Rebels head east as 8/11 favourites and will do so without the services of wing forward Daniel Kearney after he informed manager Kieran Kingston that he would be opting out of the squad for 2020.

Meanwhile, Deise star Austin Gleeson could miss out after sustaining another injury whilst on duty for Waterford IT in the Fitzgibbon Cup.

The Mount Sion man would be a massive loss to new manager Liam Cahill as he looks to get his side off to a flying start in the league on home turf.

HL Division 1 Group B round 1

West and east collide in Ennis this Sunday as Clare welcome Carlow for Round 1 of Group B in Division 1.

New Banner boss Brian Lohan wasn’t overly concerned by his side’s eight-point defeat to Limerick in the Munster SHL earlier this month but you can be sure that he’ll be eager for two points here.

In fact, anything other than a win for the Munster side would be a huge shock to the system early on as they get set to welcome the Barrowsiders as whopping 1/33 favourites.

Carlow edged survival last year and will be out to hold on to their status again as Colm Bonnar enters into his fourth season with the team.

This one could well be the closest of them all to call on opening weekend as Mattie Kenny’s Dublin side visit UPMC Nowlan Park.

The capital men are 7/4 underdogs for their first league outing of the season and are set to welcome back a raft of players which were unavailable for their recent Walsh Cup semi-final loss to Galway as a result of Fitzgibbon Cup duty.

Newly appointed captain, Colin Fennelly & Co will be back in the Cats’ pack after helping Ballyhale Shamrocks to another All-Ireland club SHC success, but Sunday’s opener with the Dubs may come a bit too soon.

This one could well go down to the wire and, with home advantage in their favour, it’s Kilkenny that get the nod.

HL Division 2A round 1

Antrim make the trip to Arklow on Sunday with new supremo Darren Gleeson looking for a flying start to his side’s league campaign.

The ex-Tipperary goalkeeper took over the Saffrons in September and his charges are strong favourites to hit the ground running.

These two met earlier in the month in the semi-finals of the Kehoe Cup when Offaly were on demolition duty against the Royals.

The Faithful men struck eight goals that day and manager Michael Fennelly – fresh from adding another All-Ireland club SHC title to his collection with Ballyhale Shamrocks – will be hoping for a repeat performance on Sunday from his team.

HL Division 2B round 1

A new-look London come to Newbridge this weekend looking to score their first Allianz League win since 2018 after being relegated last season winless.

David Herity is stepping into his second campaign with Kildare and no doubt knows the Exiles will put up a fight for the points in this opener.

Celtic Park plays host to this derby on Sunday and it looks a tight one to call on opening weekend.

Going on last year’s league form, as well as having home advantage, it’s Derry that get the nod to edge the points.

HL Division 3A round 1

HL Division 3B round 1