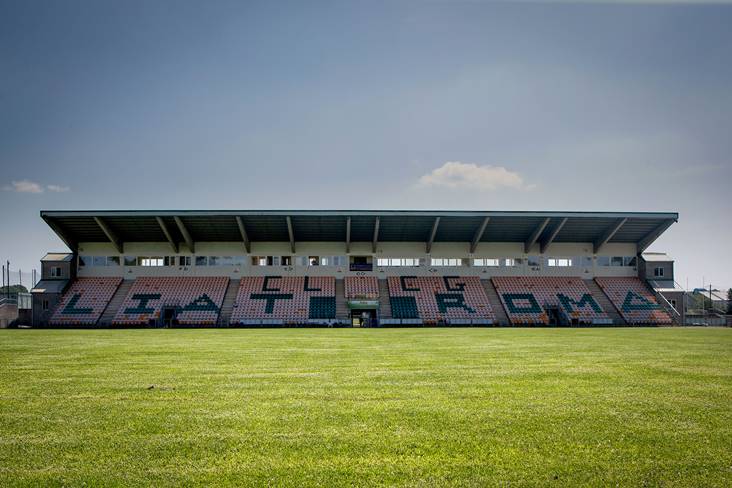 A view of Pairc Sean MacDiarmada, Carrick-on-Shannon before the All-Ireland SFC qualifiers round 3 clash between Leitrim and Monaghan.
©INPHO/Laszlo Geczo.

Leitrim county board has confirmed that it will stage the knock stages of their club championships behind closed doors.

In a statement released this morning, it was confirmed that the county’s GAA Management Committee took the decision last night to play its knock-out games in the senior, intermediate and junior championships behind closed doors.

Since the GAA returned to action last month, only 200 have been allowed to gather for games under the government’s Covid-19 restrictions for outdoor events.

However, Leitrim GAA’s statement this morning outlines that “no access will be granted to venues other than to those who hold one of these Player/Official Passes” from their competitions’ quarter-final stages onwards.

The statement in full reads as follows:

“Leitrim GAA Management Committee at its meeting last night decided that the knockout stages of the Connacht Gold Senior Football Championship, Smith Monumentals Intermediate Football Championship and in all probability at least the semi-finals and final of the Vistamed Junior A Football Championship will be played behind closed doors, while the government imposed crowd limits remain at a maximum of 200 people per outdoor venue.

“While this is a decision that is bound to register immediate shock, there is a strong rationale behind it. It is widely recognised that when arriving at the concluding stages of any competition, interest levels rise accordingly. Interest in our games at group stages has been heightened in the very fact that there was such a long layoff from sporting activity and we also believe that interest levels will have risen sufficiently high enough to ensure that the current restriction of a maximum of 200 people per venue, inclusive of players and officials, will not be near enough to satisfy demand.

“While we are aware that the quarter-final pairings will not be decided until after Saturday’s action, it is immaterial what the various combinations of teams may become, interest levels will naturally rise. This, almost certainly, will place club officials and county officials in a near-impossible situation as regards who will gain access to the limited number of ‘golden tickets’ in match situations which would, in all practicality, see the number of tickets available to supporters reduce from a heretofore 60 per club to a number at most 50 and probably even less when one considers the various interested parties who will naturally look to attend as our competitions move towards a conclusion.

“With the current crowd restrictions, it is viewed as being the fairest solution to all concerned to allow access to no supporters as distinct to having to cater for an impractical situation that would arise at the local level with regard to the distribution of these few precious tickets, and the probability of inevitable confrontation that could follow at turnstiles at venues in consideration of people who have not gained a ticket.

“To counteract this move it is the intention of the Leitrim GAA Livestream Team to extend its coverage of our games to ensure that if at all possible all games in the Connacht Gold SFC, Smith Monumentals IFC, and Vistamed Junior A Football Championship (which, in the case of the JFCA, are restricted to the closed-door policy) will be covered and transmitted live. This will involve the co-operation of CCC Liatroma whose job has been made exceedingly more difficult by this decision. This committee is currently working on a solution to ensure that this may happen. CCC will communicate with you as soon as they have an inevitable reschedule agreed. Any relegation finals in the SFC and IFC are also currently covered by this policy.

“Of course, we hope with confidence that coverage of our games can also be provided by the various media outlets who have done sterling work to ensure that coverage of our games has been on a par, if not greater, in this year than any year heretofore. Media personnel will not be prevented from attending our games for obvious reasons. Media personnel may apply to [email protected] for an official pass and this will be granted on request.

“It needs also to be stressed that while we greatly appreciate the efforts that clubs have made in the excellent live coverage of games that have not been covered by Leitrim GAA Livestream when it comes to any future games that are being streamed by Leitrim GAA, permission will not be granted to alternate sources of live feed. It has been flagged from an early stage in the provision of live footage by Leitrim GAA that this would be free for the group stages and that the policy would be changing to pay per view from knockout stages.

“This will remain the policy going forward and details of this platform will be posted on www.leitrimgaa.ie over the coming days. Livestreaming, while having been provided free to date, does come at a cost to Leitrim GAA and this has to be naturally covered for in transmissions from quarter-finals forward and pay per view details will follow at www.leitrimgaa.ie. It is our intention to provide access to all probable patrons via this platform and while it would not be our avenue of choice in normal circumstances, we hope you all understand that this is proving to be an increasingly challenging year.

“In contemplating the groundbreaking nature of this decision, we trust that you accept that it has been made in the best interests of all concerned, given that we have to ensure the safety of all, players, officials, and supporters in the midst of a pandemic that does not seem to be going away anywhere soon.”