Limerick have booked a novel meeting with Waterford in the 2020 All-Ireland senior hurling final by virtue of this 0-27 to 0-24 defeat of Galway at Croke Park.

The December 13th decider will be a repeat of this year’s Munster final, wherein the Treaty County defeated Na Deise by four points a fortnight ago.

The sides were level after 70 minutes but the winners outscored Shane O’Neill’s men by five points to two during the nine minutes of injury time added on at the end, with Man of the Match Tom Morrissey registering three of those scores.

After a sluggish start, the 2018 champions gradually got on top but they struggled to shake off the resilient Tribesmen, for whom Joe Canning was superb before being removed from the field late on after shipping a shuddering blow to the head.

John Kiely’s charges led by 0-15 to 0-13 at the break, thanks largely to a combined first-half total of seven points from on-fire wing forwards Gearoid Hegarty and Morrissey, while Canning’s return before the break included no fewer than three points from sideline cuts. The men in maroon started best and led by four early doors but the momentum swung after the first water break and the loss of all-action Cathal Mannion to injury represented a major blow to their prospects.

Having figured out how to get around Galway sweeper Padraig Mannion, Limerick dominated the second quarter and outscored their opponents by eleven points to six during that period – ultimately a match-winning spell.

The Treaty County went into this game on an ominous run of form, having retained their Munster crown with victories over Clare, Tipperary and Waterford, while the Tribesmen deposed both reigning Leinster champions Wexford and Liam MacCarthy Cup holders Tipp either side of a narrow Leinster final defeat to Kilkenny.

Sean Loftus was a late addition to the Galway starting team in place of Fintan Burke, while Limerick started as announced on Friday.

The westerners were quickest out of the blocks as Canning’s first sublime sideline cut from beneath the Cusack Stand flew straight between the Hill 16 posts to open the scoring and his converted free doubled the difference in the third minute before another routine free made it three points to none after six minutes.

A brace of Morrissey points – the first coming on nine minutes - got the Munster champions up and running but these were cancelled out by beautiful strikes from Mannion and Conor Whelan. Hegarty slotted Limerick’s fourth point after Seamus Flanagan cancelled out Brian Concannon’s point, leaving three between the teams at the first water break – 0-7 to 0-4 in Galway’s favour.

Concannon made it double scores when the action resumed, Aaron Gillane (free), Hegarty and Diarmuid Byrnes replying to leave just a point in it after 22 minutes. Morrissey’s third drew them level and Byrnes’ second – Limerick’s fifth in a row - on 24 minutes propelled the victors ahead for the first time, 0-9 to 0-8, Galway losing Mannion to injury in between those scores.

Gillane hit back from a tight angle after Concannon and Canning (free) had nudged Galway back in front and the Treaty pushed on with points from wing men Hegarty – his fourth – and Morrissey – his third – before Canning replied with his second outrageous sideline cut. Gillane converted a stoppage-time free after Eanna Murphy denied Flanagan, captain Declan Hannon raiding forward to put four between them only for substitute Adrian Tuohy and Canning (sideline cut – ending the half as he started it!) to raise the last two white flags before the short whistle. 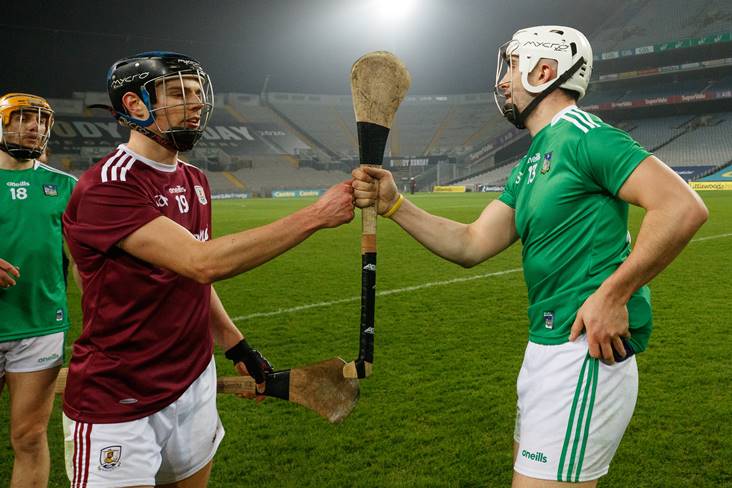 Joseph Cooney halved the deficit within seconds of the restart but Gillane’s fifth point (free) restored Limerick’s two-point cushion and Flanagan made it three, the unerring Canning replying this time with a sideline cut at the Davin End from beneath the Hogan Stand.

Murphy executed a double save to deny first Flanagan and then Kyle Hayes from the rebound but a soft Gillane free extended Limerick’s lead to three points with 25 minutes remaining. Canning swung over a free – his ninth – but the gap was quickly five as substitute Peter Casey pointed twice either side of a Cian Lynch strike: 0-21 to 0-16 at the second water break.

Canning’s third successive pointed free left things in the melting pot passing the hour mark but the Tribe talisman’s evening ended on a sickening note when he was stretchered off after sustaining a head injury in a thundering collision with team-mate Joseph Cooney.

Canning’s replacement Evan Niland nailed a long-range free with his first touch and Whelan tied the scores up for the fourth time on 70 minutes, with nine minutes of injury time to be added on due to that dreadful Canning knock…

Byrnes nailed a monster free and Morrissey and substitute Adrian Breen left two between the teams after an inspirational Niland point from distance had equalised on 75 minutes. A Fintan Burke sideline cut halved the deficit again with seven minutes of injury time played but a Morrissey brace closed the scoring as the 2018 champions advanced to a December 13th rematch with Waterford.