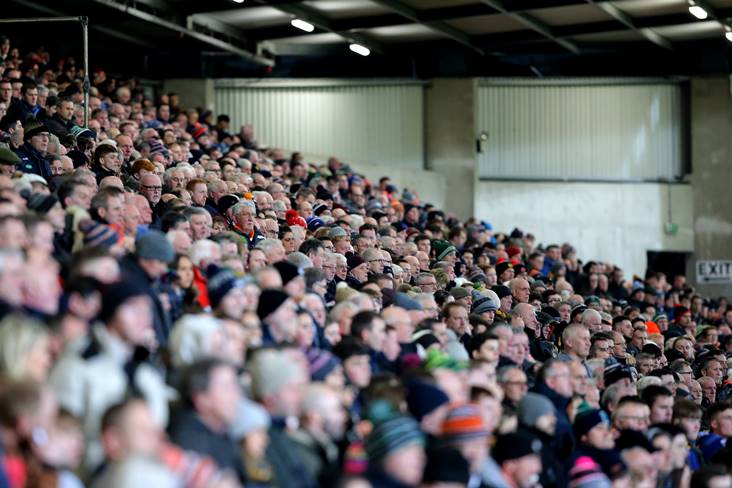 A large crowd turned out at the Athletic Grounds for Armagh versus Cavan. ©INPHO/Philip McGowan.

Conor McManus won’t care to be reminded about Gleeson’s penalty save while he also kept a clear cut Jack McCarron chance out.

After getting their hands on the O’Byrne Cup, Longford continued their winning ways with a three-point round 1 success over Louth at home. McTague and Leitrim renewed acquaintances with Derry in what was a repeat of last year’s Division 4 decider and they came agonisingly close to gaining revenge for that defeat in Croke Park.

O’Shaughnessy was a standout performer in Tipperary’s Division 3 draw with Down. As per usual, the experienced Murphy didn’t shirk any responsibility in Saturday night’s entertaining contest.

Donaghy superbly marshalled the Armagh defence as they laid down a marker in Division 2 with a 13-point victory over Cavan. O’Hora epitomised Mayo’s never-say-die attitude in Ballybofey and a share of the spoils was a just reward for his efforts.

The marauding midfielder delivered an exhibition against his father’s native county which included four points that were of the top drawer variety. Back from the AFL, Connellan delighted the home support with an eye-catching display in the last gasp win over Clare.

When the game was in the melting pot, Kilkenny helped put Dessie Farrell’s side into a winning position and will have been disappointed to have let a point slip.

Once they have their talismanic captain in their ranks, Donegal will always be a force to be reckoned with.

McCurry’s finger prints were all over the Red Hands five-point success over Meath – ‘Dazzler’ helped himself to 1-6 against the Royals. The youngster’s league debut will live long in the memory after his 1-6 heroics against the Breffni County.

Concerns that the added responsibility of captain could weigh heavily on the 21-year-old’s shoulders evaporated into the Croke Park air on Saturday night. A spectacular O’Carroll goal sowed the seeds for the O’Moore County’s comeback against Roscommon.