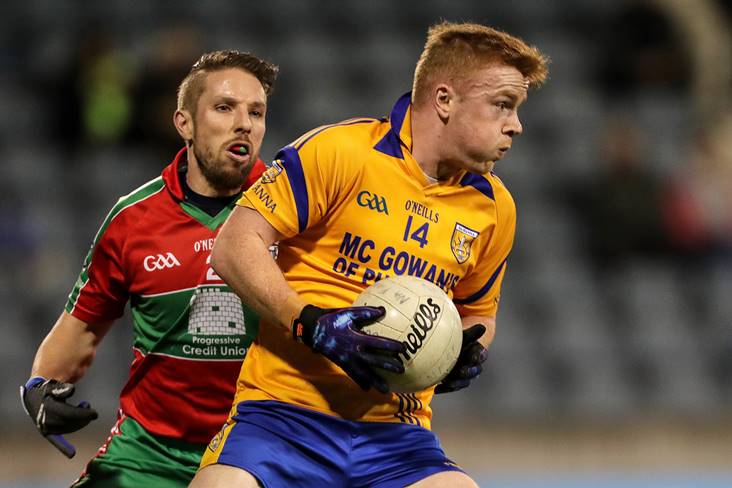 The Twitter reaction to Conor McHugh's sending off in Na Fianna's extra-time defeat to Ballyboden St Enda's in last night's Dublin SFC quarter-final has been one of disbelief.

The Na Fianna top-scorer received an extremely harsh second yellow card at the end of normal time after he was dragged to the ground by opponent Declan O'Mahoney (who was also booked), and his absence was sorely felt in extra-time when the Basquel brothers, Colm and Ryan, inspired 'Boden to a 3-15 to 1-15 victory.

Absolute joke that Conor McHugh got sent off tonight,how d linesman didn’t inform d ref what happened is scandalous, d only satisfaction was that he got a few digs into o mahony. Definitely costs Na fianna, both he & they’ll be back, young team with plenty talent.

Anyone see the raw deal that Conor McHugh is after getting for Na Fianna? Incredible

Cracker of a game between Na Fianna v Ballyboden in DSFC 1-14 each. ET coming up.
However what happened with O’Mahony and Conor McHugh at the end an absolute joke ! GAA refs need to drop this BS of booking 2 players. It’s a cop out. McHugh didn’t do wrong yet got a 2nd yellow.

Piss poor decision sending of Conor McHugh how either the ref or linesman came up with that is shocking. Best player of the pitch for Na Fianna at the minute

Laughable from the linesman and ref in the Ballyboden & Na Fianna quarter final. Conor McHugh was not allowed play any part in the final passage of play and ends up getting a second yellow for trying to free himself up!? 🤨

Disgrace Conor McHugh being sent off at the end of that Ballyboden Na Fianna game. What a match he was having!

What just happened with Declan O Mahony and Conor McHugh is an absolute joke!!!!! I’m sick of it happening. It drives me nuts. McHugh didn’t do wrong yet a yellow and off.

Waiting for Ger Brennan and Philly McMahon to day Declan O'Mahony did nothing wrong. This is the type of crap that ruins an otherwise excellent match pic.twitter.com/hOE7Py4mfM

The more I see that Conor McHugh sending off the more frustrating it is.. as if McHugh is going to want to start wrestling with O’Mahony with Na Fianna on the attack in the last minute

Holy fuck, that is one of the worst calls Ive ever seen. ( Conor Mchugh ) Ref and Linesman looking straight at it. If Na Fianna lose this, there is going to be some dirty scenes at the end

Dessie Dolan: "probably a bit of inexperience let Na Fianna down on the night"