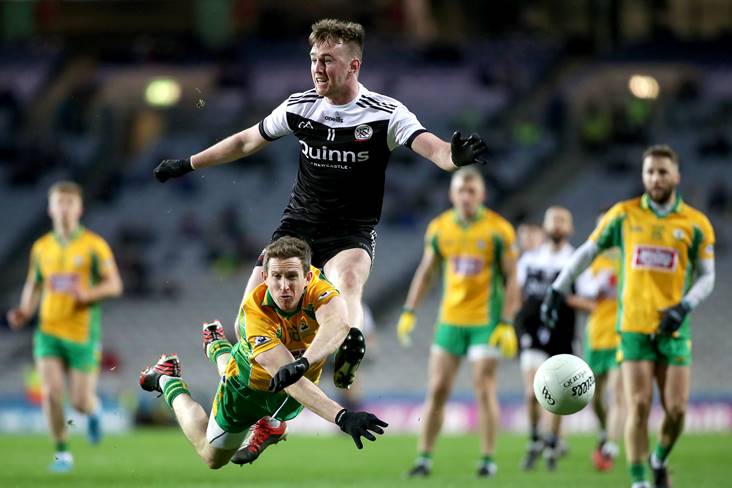 An extra-time scoring blitz saw Corofin carve a niche for themselves in the history books today as the first team to complete an All-Ireland Club SFC three-in-a-row.

This was the toughest of the three title wins as Kevin O’Brien’s charges were pushed all the way by 14-man Kilcoo at Croke Park but they dug deep into their reservoir of experience to eke out an eight-point extra-time victory.

Mickey Moran and the Magpies can be proud of their gallant effort but their chance of success in normal time was dealt a blow when they lost the services of Dylan Ward to a second yellow card in the 35th minute.

They refused to throw in the towel, however, and, in front of an attendance of 25,930, their perseverance was rewarded in a pulsating finish with an equalising point from a Paul Devlin free deep into stoppage time.

The teams finished deadlocked on 0-7 apiece when referee Conor Lane brought normal time to an end but Kilcoo were unable to make the most of their second bite of the cherry as normal service was restored by Corofin once extra-time got underway.

Points from ‘man-of-the-match’ Ronan Steede, Dylan Canney, Liam Silke and Gary Sice (free) placed them in pole position before Conor Cunningham made no mistake from close range to score the game’s only goal and effectively kill off the Kilcoo challenge.

They enjoyed a 1-11 to 0-7 cushion at the halfway stage in extra-time and Jason Leonard tagged another point in the second period as the opposition drew a blank in extra-time.

The game was only two minutes old when a goal chance presented itself to Micheal Lundy but Kilcoo netminder Martin McCourt was equal to the task.

The first-time finalists got plenty of bodies behind the ball throughout and the tactic proved successful in curtailing Corofin’s much vaunted attack.

Moran’s men held their highly regarded opponents to just two points in the first-half while they posted three points at the opposite end of the field to give them a minimum margin lead at the break.

13 minutes had elapsed on the clock before the game’s first score arrived courtesy of centre-forward Devlin via a free. Kilcoo had two points on the board before Steede opened Corofin’s account in the 23rd minute and McCourt was called into action once again two minutes later to thwart Martin Farragher’s goal attempt.

Cathal Silke got Corofin back on level terms in the 28th minute while Leonard squandered the opportunity to give his team the lead for the first time with a free attempt that dropped short.

Devlin punished that miss at the opposite end of the field shortly after and the Down and Ulster champions took a slender by 0-3 to 0-2 advantage into the break.

Corofin issued a statement of intent straight from the second-half throw-in with Steede restoring parity with a long range point.

Left half-back Wall was forced to leave the action because of injury but Sice converted the resulting free to edge Corofin in front.

Sice added another point via a free in the next play and the pendulum had swung in the Connacht champions’ favour at that stage.

It was 0-6 to 0-4 to the team in yellow and green at the 45 minute mark and a Leonard free gave them a three point cushion which was a big lead in the context of the low-scoring encounter.

14-man Kilcoo didn’t read the script, however, and points from captain Conor Laverty and Darryl Branagan left them within striking distance before Devlin sent over the late, late leveller.

There was no shortage of talking points as Corofin also finished normal time with 14-men after Michael Farragher was dismissed while Daragh Silke picked up a black card for the foul which gave Devlin the opportunity to send the game to extra-time.