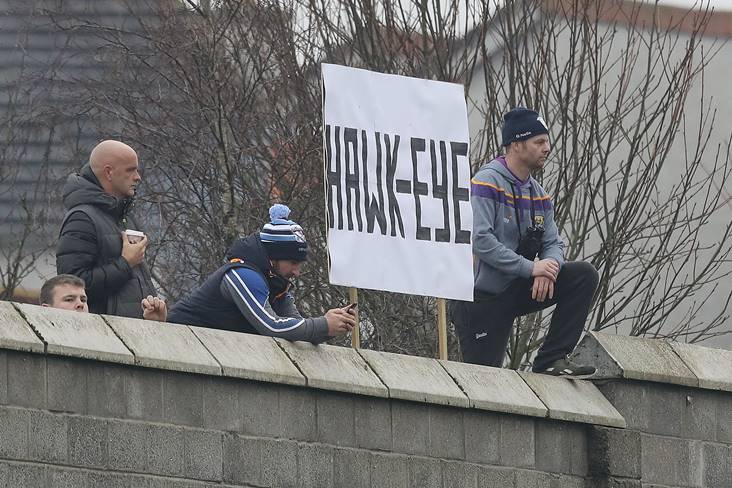 Hawk-Eye was on standby for the 2019 Walsh Cup final between Wexford and Galway at the Bellefield GAA Complex in Enniscorthy. ©INPHO/Lorraine O'Sullivan.

There are four finals down for decision on Saturday and here we preview the last clashes taking place before the National League gets underway in two weeks’ time.

The early throw-in on Saturday is at Dr Hyde Park where Roscommon and Galway contest the Connacht SFL final for the sixth year running.

The Rossies have reigned supreme in the last two finals of this competition but nonetheless are 13/8 underdogs against Padraic Joyce’s Galway tomorrow despite last weekend’s annihilation of Leitrim.

The Tribesmen came through a penalty shoot-out with Mayo to get this far and could well be pushed all the way against the JJ Nestor Cup holders in this one.

Offaly are on the hunt for their first piece of silverware under John Maughan this weekend when they welcome Longford to Tullamore.

Maughan himself said he was “not overly happy” with his side’s showing the last day which was enough to upset neighbours (and now former holders) Westmeath with five points to spare.

That result combined with home advantage makes the Faithful men 8/11 favourites here after Longford booked their passage through to this final by virtue of Darren Gallagher’s late point over an experimental Dublin side.

In their way stands a Monaghan side which received a bye into this final following Donegal’s decision to pull out of the competition at its semi-final stage.

Should the Farney men supply an upset here they would be one behind the Red Hands on the Roll of Honour but, with Mickey Harte’s side being somewhat specialists in this competition, it’s the holders that get the nod to claim their eighth success in nine seasons.

Shane O’Neill booked his first win as Galway senior hurling manager last weekend when his side overcame Dublin with a point to spare at Parnell Park.

Now the former Na Piarsagh boss will pit his wits against Davy Fitzgerald and Wexford to try and bring some early silverware for the season out west.

Galway won last year’s final meeting between these two in Enniscorthy and are narrow favourites (10/11) to repeat the trick at MW Hire O'Moore Park.