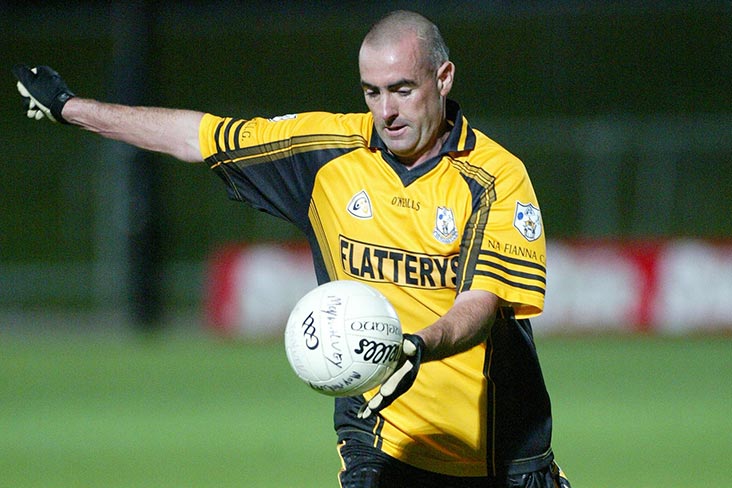 The late Jason Henrick in action for Na Fianna

It is with great sadness that we report the passing of All-Ireland MFC and U-21 winning Meath midfielder Jason Henrick.

Renowned as a hard-working midfielder, who was particularly effective in the air, Na Fianna clubman Jason lined out at midfield back in 1990 when the Royal County bridged a 33-year gap in winning the Tom Markham Cup.

He was also a key figure three years later when the Tom Hanley captained Under 21s created history by winning the county’s only All-Ireland title at the grade.

O’Moore Park, Portlaoise was the venue and Kerry once again provided the opposition. The Paul Kenny managed team prevailed on a scoreline of 1-8 to 0-10 thanks to Thomas Shine’s early goal.

An All-Ireland win seemed a distant ambition when Meath trailed Kilkenny by 0-3 to 0-4 at half-time in their second round clash that year but Jason popped up with an important second-half goal while he repeated the trick in the 2-11 to 2-9 Leinster final win over Dublin.

To mark the 25th anniversary of that famous success, Jason and his U-21 winning team-mates were honoured as special guests of Meath GAA at the 2018 Meath SFC final between St Peter’s, Dunboyne and Summerhill.

It is with great sadness that we learn of the untimely passing of a local footballing great, Jason Henrick.

Affectionately known as JC by many, Jason was one of the finest and most decorated sportspeople to come out of our local area. A winner of two All-Ireland Football medals, a Minor All Ireland in 1990 and an Under 21 All Ireland in 1993 along with a Leinster JFC medal, Jason was a special talent. He possessed a cultured left foot, could leap like a salmon and was as strong as a lion.

He played his early club football with the Enfield club, and with the amalgamation of Baconstown, Enfield and Rathmolyon in 2000, he was a driving force on the intermediate teams for the latter part of his career. He helped to coach underage teams in the club in the 2000’s and was fiercely popular among the young players. All current footballers in the club would point to Jason as being their inspiration.  He played into his late 30’s where he was always a source of advice and encouragement for younger players coming into the team. He was much loved by his team mates for his wit, character, talent and above all his friendship. The picture above shows Jason in action in the Junior C FC final from 2011 in what would have been one of his final games for the club.

Many members of Jason’s family have worn the Na Fianna jersey with distinction including his son Graham, his brother Miah and Jason was also a big supporter in recent years of his nephews Dean and Evan Henrick when Na Fianna contested two Keegan Cup finals.

Jason was a great character, always up for a chat especially about Na Fianna or Meath GAA and he had a heart of gold. It brought great joy to Jason and many others to see him in Pairc Tailteann on County Football Final day in 2018 as the U21 All Ireland winners of 1993 were honoured out on the pitch marking the 25th anniversary of their historic win. Jason was delighted to be reunited with his old team mates on field once again.

It is a testament to the impact Jason made that no matter what part of the county you go to, when you are asked where you are from and you answer Enfield or Na Fianna, people will almost certainly mention that that’s where Jason Henrick is from. He will never be forgotten by all who had the pleasure of being his friend or teammate.

Na Fianna CLG would like to express our deepest condolences to Jason’s parents Lisa and Paddy, son Graham, daughters Dionne and Ella and also Michelle, his brother Miah & sister Margaret, grandchildren Hannah and Shakira and all his extended family and friends.

Rest easy Jason, you will be sadly missed.

Reposing at his parents' home (A83 RD90) on Wednesday from 4pm with Rosary at 8pm. Removal on Thursday morning to the Chruch of The Assumption, Jordanstown, Enfield (A83 YO21), for Requiem Mass at 11am followed by burial afterwards in the adjoining cemetery.