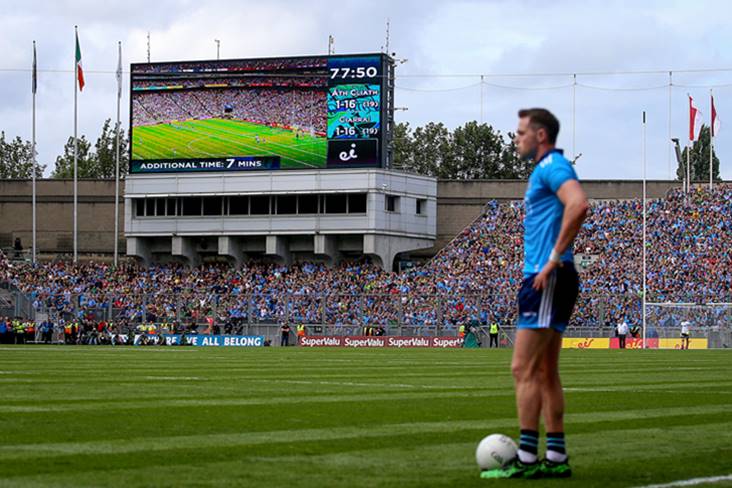 A view of the scoreboard as Dublin's Dean Rock prepares to take the last kick of the game during the drawn All-Ireland SFC final against Kerry at Croke Park. ©INPHO/Tommy Dickson.

"At the end of the day we weren't in an All-Ireland final since 2015. You have a young team. What are they going to get only experience out of the game? There is a learning curve."

Some may feel Kerry might have missed their chance in yesterday's epic drawn All-Ireland SFC final but Kingdom boss Peter Keane sees it differently.

"The performance wasn’t good enough to get the result, we have the opportunity now to rectify that."

Dublin boss Jim Gavin has demanded more from his team after the five-in-a-row chasing champions were forced to dig deep to earn a replay date with their greatest rivals on September 14.

"We knew the character that was in that team, we've been involved with them since they were U14. We've had four years on the go with them and that's one thing that can never be questioned about them, their character, we're just so proud of them."

Cork showed a never-say-die attitude to land their first All-Ireland MFC title in 19 years in the most dramatic fashion and manager Bobbie O'Dwyer was hugely proud of his players afterwards.

"The boys are numb... can't believe it. They were there, it was almost there for them."

Galway minor boss Donal Ó Fátharta could only watch on as his side let the Tom Markham Cup slip from their grasp.

"Does that tell you that he doesn't trust those guys to go in against the Kerry attackers?"

"When Banty took over in 2005 Monaghan were at the bottom of the pile. We were playing in Division 2B."

All-Star forward Conor McManus has backed the returning Seamus McEnaney to be the man to guide Monaghan's fortunes in 2020.

"It was an outstanding performance in the most difficult of circumstances by the referee. I had a few chances to look back at the game. There is no debate about Jonny Cooper's sending off."