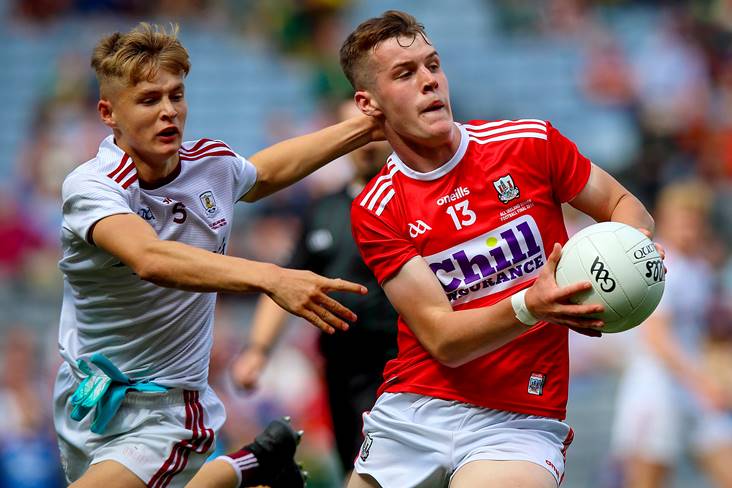 Following an incredible end to normal time that saw goals go in at either end in the space of 60 seconds and Galway then miss a free to win it, Cork finally gained the upperhand over Galway in extra-time to claim the Tom Markham Cup for the first time since 2000.

Conor Corbett played a captain's part by scoring 1-7 from play as the Rebels added the All-Ireland minor title to the All-Ireland U20 crown they won last month. The sides were deadlocked on 2-13 apiece at full-time, but Bobby O'Dwyer's men never looked back after Ryan O'Donovan punched home their third goal at the start of extra-time.

In what was an absorbing contest and a brilliant advertisment for Gaelic football, Galway - conquerors of six-in-a-row chasing Kerry in the semi-final - led by 0-8 to 0-5 at half-time with Tomo Culhane leading their scoring charge with 0-5. Indeed, Donal O’Fatharta’s men might have been out of sight had Cork 'keeper Cian O'Leary not made crucial saves from Culhane and Nathan Grainger. At the other end, Corbett shot three points to keep the winners in touch.

Galway extended their advantage to four points after the restart before Kelan Scannell and Michael O'Neill combined to set up Jack Cahalane for a 37th minute goal for Cork. Darragh Cashman then drew them level before man of the match Corbett edged them into a 1-8 to 0-10 lead. Grainger restored parity for Galway in the 43rd minute and it was nip-and-tuck thereafter before Daniel Cox's rasper of a goal nudged them back in front, 1-12 to 1-11, with three minutes of normal time remaining.

Michael O'Neill levelled from a free before Culhane and Luke Murphy traded points. But the real drama came in the third minute of injury-time when Galway substitute Niall Cunningham's rocket of a shot to the roof of the Cork net was immediately cancelled out by a cool Corbett finish at the other end.

Galway were then awarded a free close to the Cusack Stand sideline to win it, but Culhane fired to the left and wide. That miss came back to haunt the Westerners in the first period of extra-time when O'Donovan's well-worked goal was followed by points from Corbett and O'Neill (two) as the Rebels established a six-point lead.

Cunningham bagged a second goal for Galway in the second period, but it was a case of too little, too late as Cork won a memorable final.