"It's kind of play hurling and camogie, and go to mass" 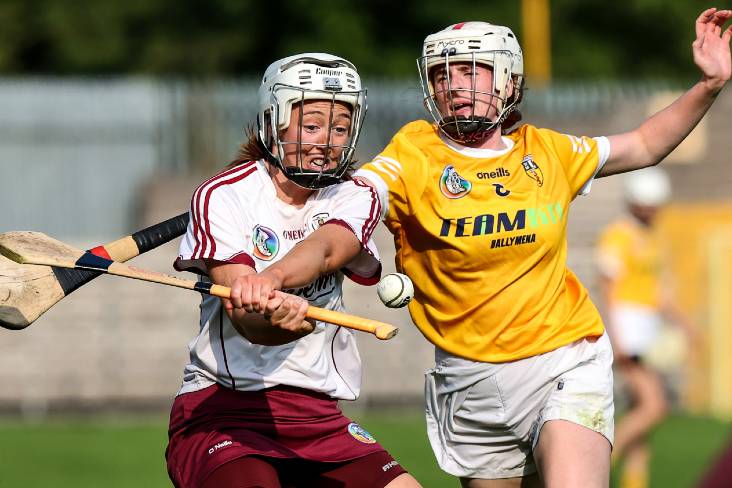 It has been a busy day for Lucia McNaughton when she finally takes the call. She has already made the return trip to Croke Park for a photo shoot and a quick once over of the famous stadium while she’s at it, before Sunday’s real thing, captaining Antrim on the day of her 26th birthday, in the All-Ireland Intermediate Camogie Final against Kilkenny (2pm).

After tearing back up the road, the NHS physio scooted into work to do a couple of hours. It’s a profession that gives her real satisfaction, either in the rehab hospital she is based in or around the community as well. Easing discomfort and pain is a rare and wonderful gift.

Antrim have had their share of that in camogie terms since reaching the decider in 2011 – their most recent success was in 2003, though they claimed the premier junior title in 2010 – but the signs of growth have been evident through schools and underage advances in recent years.

The panel that reached last year’s final was young and that experience, where they wilted in the second half against Down, will be sure to stand to them this time around.

This was in evidence as they beat the Mournewomen in the group stages of the National League, though they went down to their long-time rivals by a very late goal in the Division 2 final. Down went on to ruffle a lot of feathers in the senior grade and will be competing at the highest grade again next year.

McNaughton and co want to join them. The Loughgiel Shamrocks dynamo has heard stories of triumph on big days at Croke Park, but isn’t anxious to emphasise them, because she knows, of course, that they have no influence on what unfolds on Sunday. And anyway, she wants to write her own story.

But the pride is evident. Especially in her late grandmother, Mary McGarry, who made her debut as a teenager when Antrim went on to complete the All-Ireland three-in-a-row at senior level in 1947. Mary’s husband John, a member of the famous Shamrocks county championship winning team of 1956, has told his granddaughter about his wife’s exploits as the Saffrons’ primary freetaker for a decade, lining out at midfield, just like McNaughton herself does.

“She would be our corner-back, Maria Lynn’s granny as well. Unfortunately she died when I was only one. So I never really knew her. But I would be talking to Grandad and he would always have been to her matches and things. My grandad would obviously have played hurling too.

“You find out different things as you go along. Obviously back then there wasn’t any photos or footage. Whenever you come across a few photos of them playing it’s really nice to see. You are obviously looking to follow in their footsteps as well.

“She was 18 when she won it, so she was very young, a lot younger than I am at the minute. Anna Connolly’s mother (Mary) won the All-Ireland as well (at intermediate). So there is a lot of links. Maybe it’s a good omen.”

Then there is McNaughton’s father, Seamus, or ‘Crow’ as he is known.

“Daddy won in 1983, in the All-Ireland team with Loughgiel. They’re legends as well. It’s brought up once or twice anyway!”

Meanwhile, Lucia’s brother James enjoyed Joe McDonagh Cup glory in the saffron and white at the end of last year. But she has to pack all that family history into its appropriate compartment, wary of bringing too much emotion to the table, of making the final into a behemoth that could overpower her.

“As much as that’s lovely and you always have it in the back of your head, you try not to think about it too much as well. At the end of the day, it’s just another match that you try to win. I try not to put too much pressure on. Obviously, it’s a lovely thing to think about and all. And hopefully if we win it will be great but it’s just another thing that you are trying not to be distracted by.”

Clearly, hurling and camogie permeated every fibre of her household.

“There is five of us and we were always at training, out in the garden and altogether, loads of hurls. You are tackling your brother and they’re a lot bigger and stronger than you. I think that probably helps. From when I can remember we have always been playing camogie and hurling. Because in our parish, there’s not a lot else to do. It’s kind of play hurling and camogie, and go to mass really. They’re the two main things we are doing.”

Once the fixtures were published, she noted the date of the All-Ireland final. Naturally.

“Imagine winning that on any day.”

There she is again, bringing it back to brass tacks. This is about winning for Antrim, and this group of players, though she does think of those who shared many of the darkest hours with her but will not be involved on Sunday.

“The first few years were very difficult. Trying to get teams and you are basically playing matches to fill a fixture. We could have been going down to Galway with 15 or 16 players. It was very difficult, following on from 2010 and that. They had some good success with the All-Ireland. But it was a bit disappointing then for it to fall back after them players left. It’s great now to be part of a team. Being set up with everything we could need and doing quite well.

“It’s quite disappointing for those that are no longer there now. If it was a few years earlier maybe they would have been there celebrating with us. I’m sure they are delighted for us at the minute. Definitely it did take them, a few years ago to keep Antrim afloat as well.”

So there’s a lot in the mix as Antrim renew rivalries with Kilkenny.

“We played them at the start of the championship. That was our first championship match and we beat them by four points. I don’t think that match was even videoed so we couldn’t even go back and watch it. But it will be a completely different story I think going out.

“First of all it’s an All-Ireland final so it’s completely different and it’s Croke Park which brings a different element to it as well. A lot of our girls haven’t played in Croke Park before. Maybe some of the Kilkenny ones have more experience with that, especially if they’re involved with their senior team at one stage.

“It’s going to be really tough. They’re very skilful and a very fast team as well. Hopefully we’ll do okay.”