Murray hails defence while Mullaney ponders what might have been 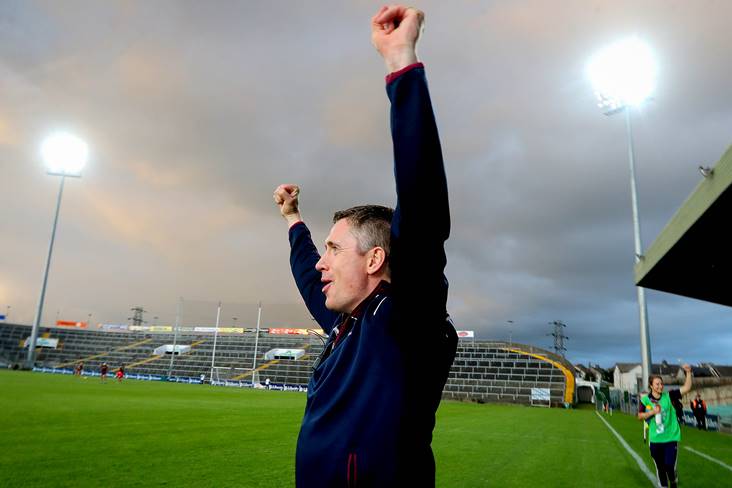 In the end, Galway got over the line, a victory that owed much to a fortuitous goal on the hour by Orlaith McGrath and a monumental contribution to their full-back line.

This was Tipperary’s fourth consecutive All-Ireland senior camogie semi-final defeat but it is a measure of the incremental improvement they have made annually that this was the first time they were truly competitive, and that they must have departed HQ with a slew of regrets.

Galway led at half-time by 0-8 to 0-4 without ever hitting their stride but it was Tipperary that dominated the second half, playing with an intensity and intelligence that had been missing in the opening period.

They were back within one after three Cáit Devane points inside four minutes after the change of ends but never could get level, despite Clodagh McIntyre creating four goal chances.

Mullaney felt that experience might have seen some of those chances pointed rather than accruing zero return but his counterpart, Cathal Murray hailed the last-ditch interventions of his full-back line of Shauna Healy, Sarah Dervan and Dervla Higgins to ensure that Sarah Healy was never beaten.

Higgins was sent off late on after Ray Kelly took the advice of one of his umpires but Murray insisted that the Athenry defender maintained her innocence and indicated that he would be looking to have the decision overturned.

“We kept a clean sheet which is always good to see,” said Murray. “I thought the full-back line were heroic. Hopefully Dervla gets off. I think it’s mistaken identity and I hope that’s the case. I thought she played really, really well and she doesn’t deserve to miss an All-Ireland over that.

“Ray’s umpires told him so he had no choice but to send her off but Dervla is adamant she didn’t do anything. I don’t think you deserve to miss an All-Ireland over that so hopefully it’ll be sorted out. Hopefully RTÉ pick up something and the red card will be rescinded.

“A few of the subs made a real contribution. Becky (Hennelly) caught a brilliant, brilliant ball near the finish when we were under real pressure and needed someone to win a ball. Full-back line keep a clean sheet. I thought the backs were really good, under pressure all the time but kept the scoreline down. Tipperary were really good today and only scored 12 points. That’s a massive sign of our backline.

“We always knew it was gonna be hard. They’d a big advantage having the match last week and hopefully the match today brings us on for the next two weeks. It needs to. We know we’re able to improve and play better and we need to do that in two weeks’ time.”

The reference to Tipperary’s advantage of a game led to Murray questioning the worth of winning a group and having to wait four weeks for the next outing.

“We’d a brilliant win down in Callan and then you’re sitting on your heels for four weeks getting ready for an All-Ireland semi-final. That’s not an advantage for a team that wins a group. What’s the point in having those groups and having a team bursting their hole to top it and then not getting that advantage? You cannot have a four-week break. It’s impossible to manage.

“Tipperary had a game last week and you could see they were rusty last week and they still shot 17 points but it brought them on an awful amount for this weekend. I felt when we were on top in the first half and playing really well, that bit of rustiness was really there. We weren’t fluent and weren’t getting scores. The amount of ball we were turning over themselves. You cannot get up to championship pace. It should be three weeks. You should get an advantage topping the group but you’re at a disadvantage at the moment.

“This is our third final in a row with this group and that’s a good sign of our consistency. If you’re going to get to three finals, when you’re not playing well you have to eke out results and the number one thing is to keep a clean sheet and we did really well at that today.”

Mullaney has always expressed pride in his players and he was bursting with it again under the stands in Croke Park but the regret was evident.

“We’d oceans of chances,” the Tipp manager stated. “Maybe getting carried away going for the kill, we could’ve ticked them over, got back level, got a point in front because we were dominating that end of the field in the second half.

“I was delighted with the way they were playing, I thought we were playing excellently. We just didn’t take the scores when they were on. We were trying to go for the big score when all we needed was one or two because there wasn’t that much between us.”

When asked if his players might have been nervous early on, he observed that slow starts had become an unfortunate feature of their championship performances.

“Wexford, Waterford, the same thing. We kind of respect the teams too much almost… we get into the dressing room at half-time, you give them talk and they know it themselves and then they go out and you’re another team. But when you’re two or three points behind a team like Galway it’s hard to make up that gap and then to get in front.

“But in fairness, you couldn’t ask any more of them. They were absolutely unreal. And Galway punished us, took their chances when they were on though they had a lot of wides too don’t forget. But inside, we could have pulled the trigger earlier or tapped them over. We were giving that extra pass to try make the perfect goal.

“So I’m devasted for the players.

“Today was our day. That’s not to say we won’t have further days but today the opportunity was there. We just didn’t push on. If we’d have started like we’d have played in the second half I think we’d have won going away.

“But Galway aren’t ex-All-Ireland champions for nothing either. They’re an experienced team and a hard outfit to get around. They’re big and physical but we just didn’t put them away.”