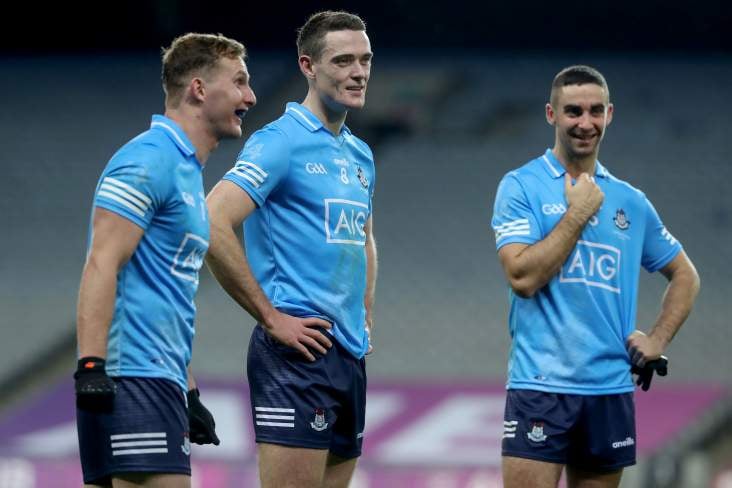 Having been centrally involved in getting the funding to strengthen #gaa in Dublin, which @Dubs_gaa has used brilliantly, I can say ‘mission accomplished’, so why continue with the mission ?? Time for new mission - help other counties before it’s too late! #dubvcav @officialgaa

Pat Gilroy and Andy McEntee share their views on the question of whether splitting Dublin is a solution to the dominance debate #RTEGAA @RTE2 @RTEplayer pic.twitter.com/39Ij5i7IQ6

Agree with many of the sentiments expressed by Pat Gilroy on the Sunday Game tonight. That’s where the discussion needs to head.

Impossible to debate the complexity of GAA structures in a programme like this. Bigger worry is how difficult it is to effect real change. GAA democracy means too many masters to be served. #SundayGame

I was looking forward to listening to it, genuinely thought it would be a good discussion. I was very wrong!

For a very intelligent man this was dire stuff.. If you heard it in the local you’d be making for the door. #SundayGame #GAA https://t.co/LjnQd0jDgp

Mayo have been great the last x amount of years ... according to mr gilroy it’s because they have a great county board 🤣🤣🤣🤣

What really was the point in having those fellas on? Offered no stats, no ideas, just two big confused heads on them. #thesundaygame

This is a very awkward Sunday game segment 🙈

“Being a role model...is equal parts being who you actually are and what people hope you will be.” @AIDOXI pic.twitter.com/Co3IADVkLQ

Respect where due, @CILL14N is top class, over 30 championship goals, phenomenal stat. Sets up a cracker of a final all debates aside!

Well done Pat Spillane - 3-5Kpeople in Croke Park is like a pimple on an Elephant’s ass.
Family’s / Friends those close to teams should be allowed attend AI final. FOC. @RTE @SkySportsGAA need to play their part.
1000s let through shopping centres .. #MayoDubfinal

If he stays healthy there won’t be a chance anyone gets near Cillian o connor in the scoring charts ever.

This type of ruthlessness is what Mayo must bring to the final. They have been excellent in front of the posts.

The skill set of the Dublin panel is the standout difference vs the rest.

Is there any Dublin player that has improved their skill set more than Michael Fitzsimons in the last number of years? Trained as a physio and retrained as a Doctor. Mindset 👏 #GAA

I expect this bunch of players to challenge for big prizes over the next 5 years, is 10 in a row a possibility for dub now - yes? I called for this game to me movedd from croker , bball American football if you are a weak team u get first draft pick - gaa need to change something

There’s an awful lot we can all do better before we start talking about money. You couldn’t give some county boards a tenner with out making a hames of it

Clinical display from Dublin, my argument is that this Dublin financial debate is masking the conversation about how good these Dublin players are, Once in a generation players in full flow!

During today’s game, hearing the commentators refer to Cavan as the Ulster Champions - Awesome! @CavanCoBoardGaa

It just becomes a bit of a joke when we are applauding the rare score against Dublin. Not to discredit them or any team that has played them of the past seasons. Something must be done from Hq. #GAA

Ulster champions... heros’s everyone of them 💙

Really feel for Galway Ladies. They arrived 20 mins before throw in and had about 5 mins to warm up for an All Ireland Semi Final due to another venue change! Equality my arse! The LGFA have so much to answer. What a shambles #jokeshop #lgfa

Congratulations to all the Armagh Camogie team. It is brilliant to see the team lifting this trophy. Well done to all concerned ArmaghGAA @Armaghcamogie pic.twitter.com/HSf44PEmsH

Just like to take this opportunity to announce my retirement from inter county hurling. I’d like to thank all my family, friends and teammates who supported me throughout my career. It was a dream to represent Cork. I’d like to wish Cork and my friends the best . Now for golf 😀 pic.twitter.com/qNXp5sGWCS