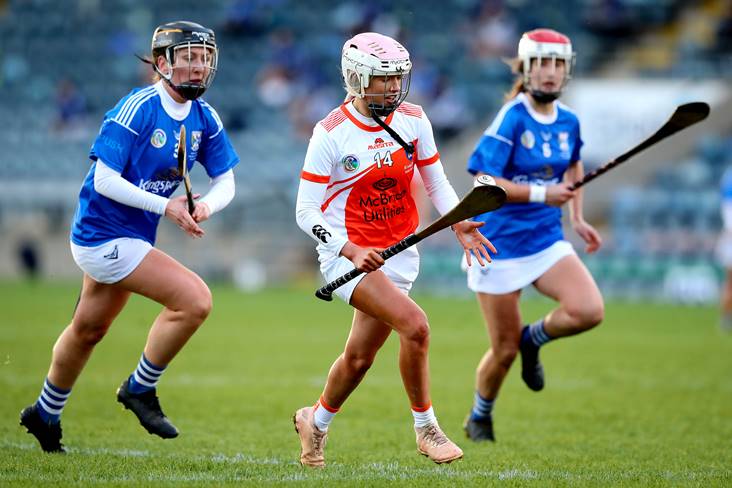 It was unlucky 13 for Cavan as Ciara Donnelly shot the lights out to banish Armagh’s nightmare of losing the decider of four years ago and finally become Liberty Insurance All-Ireland Premier Junior Camogie champions.

Donnelly has been absent for the past couple of seasons due to work commitments and it was no surprise to see Armagh competitive once more upon her return.

The Eglish sharpshooter scored one of the greatest goals Croke Park has ever seen in the 2016 defeat to Carlow but it was her prodigious point scoring that denied Cavan a famous double at Kingspan Breffni.

She finished with 13 points, her sister Leanne adding four of her own and co-captain Rachael Merry providing the other two points.

The result was in doubt right to the end though and a thrilling, high-quality encounter ended in a welter of excitement as Cavan chased a levelling goal and had two opportunities in the four minutes of injury time to get it.

First Shanise Fitzsimons shot weakly with a better-placed teammate inside and then almost made amends from the resultant 45, when her powerful shot from just inside the 13m line was somehow blocked by Gemma McCann.

Cavan had already won the Nancy Murray Cup for the Junior A Championship three weeks ago to mark their first season of competition after a 10-year sabbatical and showed their quality at the next level, particularly in attack, where their speed and direct running caused consternation in the Armagh defence.

Any notion they might be overawed was dispensed with very quickly, as Orla Smith showed electric pace to finish immediately from the throw-in.

Jimmy Greville’s side registered two quick wides and Armagh capitalised with a brace of points inside two minutes by Leanne Donnelly.

Róisín O’Keeffe and Ciara Donnelly exchanged scores as Cavan continued to look dangerous when getting the ball quickly into their forwards. Points from Fitzsimons and Sinéad McKenna gave them the lead before Rose Crowe-McKeever drove a powerful shot to the roof of the Armagh net just before the water break.

Crowe-McKeever was her side’s fifth different scorer, whereas Armagh were heavily dependent on the Donnelly sisters.

Not for the first time since the resumption of Gaelic games activity, the water break precipitated a complete turnaround in momentum. After Rebecca Brady made a brave save on her knees from Ellie McKee, Ciara Donnelly converted the resultant 45.

Merry got loose for the first time in the 22nd minute to split the posts and Ciara Donnelly fired over five points, exhibiting her unique free-taking technique of running into the lift rather than the standard standing method, as well as her accuracy from play.

That left it 0-10 to 1-4 at the break, which was one Cavan needed. They utilised it well and stormed out of the traps, revitalised, wiping out the deficit and indeed taking the lead within eight minutes of the restart. 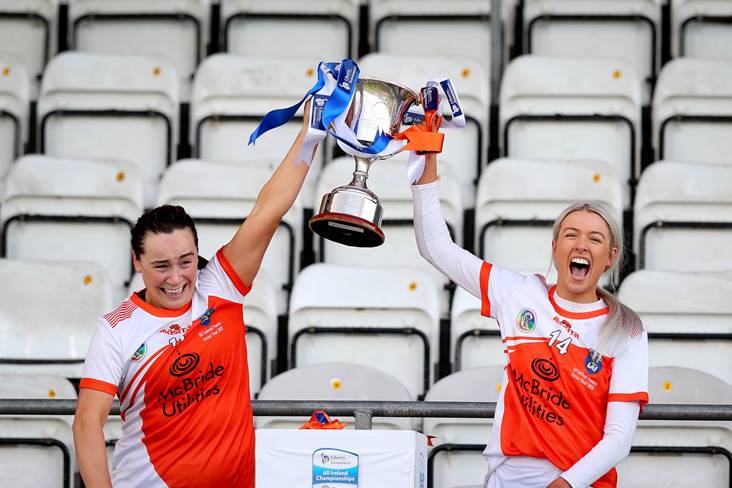 Ciara Donnelly actually stretched the lead with a fantastic point but Crowe-McKeever struck for her second goal with a stunning ground stroke, after initially failing to gather O’Keeffe’s pass.

Smith and O’Keeffe (free) raised white flags immediately after and Cavan were in front.

This was about whoever could get the most possession. Armagh could score points at will, Cavan looked like scoring goals if they had sufficient supply.

Armagh moved two points clear, Leanne Donnelly lofting possibly the score of the game when winning possession from a clearance, flicking away from another defender before lifting and striking on the run over her right shoulder.

But back came Cavan once more, this time McKenna’s bullet crossing the line despite the valiant effort of Ciarraí Devlin and they led by one again.

Michael Murphy freshened up his side by introducing five subs and that might have been significant, as they finished with the last four points, as Ciara Donnelly in particular took responsibility.

Armagh still had to survive those couple of late scares but they did that and secured the Kay Mills Cup at last.