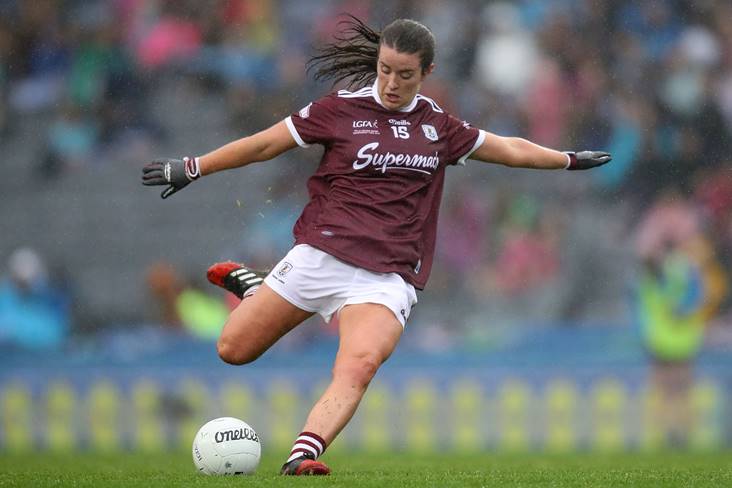 The Claregalway forward was decisive when needed after two Susanne White frees levelled the game at 0-6 to 0-6 and Donegal appeared to be in the ascendency.

However, Slevin slotted over a fine point before substitute Megan Glynn was fouled for a penalty which Slevin fired over the crossbar. Slevin added two more points from frees before rounding off a swift counter-attack to kick the final score of the game as Galway secured victory in the first game of the 2023 season.

The first scoring chance fell Galway’s way as Róisín Leonard kicked an excellent pass over the top for Slevin but Donegal goalkeeper Aoife McColgan was brave, stood her ground, and won a free out.

Róisín Leonard did open Galway’s account with a ninth minute free but Donegal’s response was swift as White curled over a close range score. Aoife O’Rourke hit back when she fired over a placed ball of her own.

Donegal were missing the missing the quality of 2022 TG4 Senior Player’s Player of the Year Niamh McLaughlin in midfield while Geraldine McLaughlin, who kicked seven points in last year’s league tie, was another notable absentee.

Maxi Curran’s charges levelled the contest again when Roisin Rodgers and Katie Dowds combined to set up the dangerous White. White then turned over the Galway kickout and earned herself a free which she converted to give Donegal a 0-3 to 0-2 lead after 20 minutes.

However, Galway took over for the remainder of the half as Maghnus Breathnach and Fiona Wynne’s side showed great patience in attack to create a scoring opportunity for Ailbhe Davoren to convert. Slevin and O’Rourke (free) found the target to help give Galway a 0-5 to 0-3 half time lead.