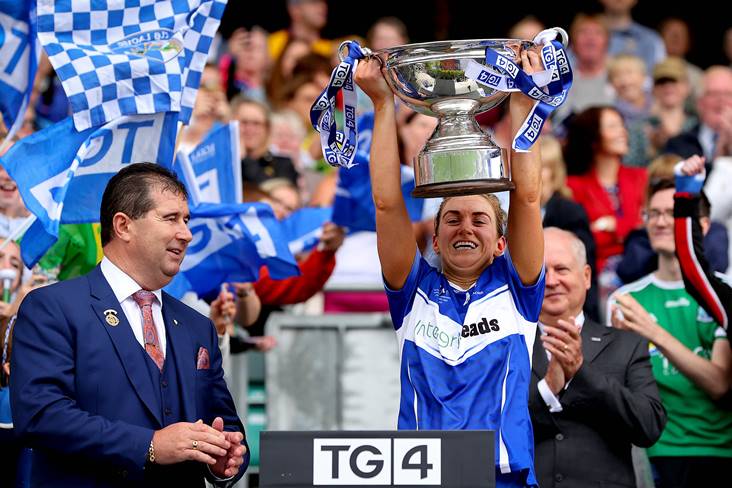 These selections honour outstanding individual displays throughout the 2022 TG4 All-Ireland Championships in the Junior and Intermediate grades – with the winners set to receive their awards at a Croke Park function on Friday November 4.

There was also a provincial ‘derby’ in the Junior decider, as Ulster rivals Antrim and Fermanagh battled it out for the West County Hotel Cup.

The silverware eventually went to Antrim, following a replay on August 13 at Armagh’s Athletic Grounds.

The Teams of the Championship have now been selected by members of the LGFA’s All Star committee – with Laois claiming seven slots on the Intermediate team, while Antrim have eight players included on the Junior 15.

Laois goalkeeper Eimear Barry, winner of the ZuCar Golden Glove award, is joined on the TG4 Team of the Intermediate Championship by six team-mates, including ZuCar Golden Boot winner and top scorer across the TG4 All-Ireland Championships, Mo Nerney.

Player of the Match in the TG4 All-Ireland Intermediate Final, Aisling Donoher, is also selected from Laois, as are Rachel Williams, Ellen Healy, Laura-Marie Maher and Erone Fitzpatrick.

Fermanagh’s exploits in reaching the Final are rewarded by the inclusion of Sarah McCarville, Aisling O’Brien, Bláithín Bogue and Junior Championship top scorer Eimear Smyth in the Team of the Championship, while there are also slots for Carlow forwards Rachel Sawyer and Sara Doyle.

Limerick, who were also beaten semi-finalists along with Carlow, have corner back Kristine Reidy selected in the team.

It has also been confirmed that the 2022 TG4 All Star banquet will be held at Dublin’s Bonnington Hotel on Saturday, November 19.

The list of 45 nominees will be revealed next week.

TG4 Junior Team of the Championship

TG4 Intermediate Team of the Championship