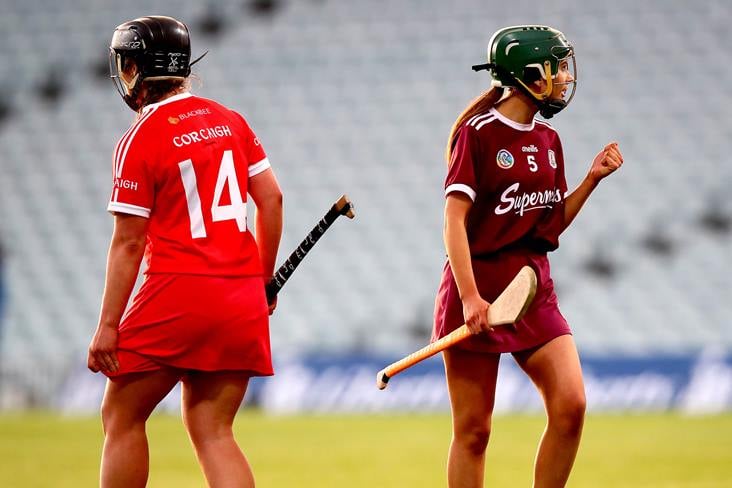 Tara Kenny of Galway celebrates a second-half score against Cork

Galway produced a performance of real steel to match their talent to return to the Liberty Insurance All-Ireland Senior Camogie Championship Final for the first time in four years.

They already have National League honours under their belt and will be looking for a first Championship success since 2013.

In the process, they put an end to Cork’s reign and the Rebels’ three-in-a-row dreams.

In a one-point game, it is impossible to discuss merit but Galway led from the time Carrie Dolan slotted a 24th minute free and never gave up that lead, despite the savage efforts of their valiant opponents.

Picking a significant moment in such a close affair can be difficult but in the period after Julia White hand-passed to the net for Cork in the 18th minute after a blistering run by Hannah Looney, Galway outscored Cork by six points to one.

In the context of how the scoreboard read at the final whistle, that was significant.

The workrate on show was phenomenal in a very physical affair and it is certainly an area of improvement among the Tribeswomen in recent years. So too was the tactical approach and in particular, the pressure they placed on Aoife Murray’s puckouts, so often the launching pad for Cork attacks.

Galway would have been delighted too with the amount of space they were able to get Niamh Kilkenny into, and the Pearses flier responded with a player-of-the-match performance.

Cork looked sharp early on despite not having played for four weeks, in comparison to Galway’s two, replying to the concession of an early Ailish O’Reilly point to lead by two, Orla Cotter (free), Linda Collins and Katrina Mackey hitting the target. Healy proved unbothered by the failure to convert and would go on to make a couple of key interventions, gathering well under heavy pressure just before the break and then making a really good save from a deflection 10 minutes into the second half.

Galway didn’t fret either, not even when White put Cork a goal ahead. They were level four minutes later, Kilkenny splitting the posts and Caitriona Cormican hitting a pair inside 60 seconds.

There would never be much between them but Galway would always keep their noses in front and it was 0-10 to 1-6 at the change of ends.

The intensity lifted further in the second half, although the scoring rate dropped, and if there were plenty of mistakes, that was assuredly down to the do-or-die nature of the exchanges.

Murray drew Niamh Hanniffy out from the full-forward line to good effect, Aoife Donohue and Kilkenny were flourishing, but at the other end, Cork were heavily reliant on O’Connor to make ground.

Hanniffy hit an inspirational point on the hour despite shipping a heavy tackle by Laura Treacy and though O’Connor made it a one-point game again with two minutes of injury time still remaining, Galway held firm for a September 8th date with Kilkenny.